Saint Brigid and Her Cross

This is one version of the stories about how St. Brigid made the first cross which we remember and make in preparation for February 1st each year:

"A pagan chieftain from County Kildare was dying. Christians in his household sent for Brigid to talk to him about Christ. When she arrived the chieftain was irritated and restless. As it was difficult to talk to the irrational man, hopes for his conversion to Christianity seemed doubtful. Brigid sat down beside his bed and began talking to him.

As was normal at the time, the floor was made with rushes both for warmth and cleanliness. Brigid stooped down and started to weave them into a cross, fastening the points together. The sick man asked what she was doing. She began to explain the cross, and as she talked his delirium quieted and he questioned her with growing interest.

Through her weaving, he converted and was baptised at the point of death. Since then the cross of rushes has been traditional in Ireland.

Another version of the story says that the man she sat with was actually St. Brigid’s father." 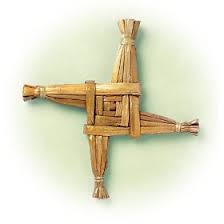 
Class Banba worked on the symbols associated with St Brigid in Religion class with Ms KB. Roisin and Monique did some more research for the following section:

This is a doll that represents St Bridget. It is made with rushes/straw by girls on St. Brigids day. It was believed to bring good fortune.

The girls would bring the doll around from house to house and the women of the house would invite the girls in.

The Brat Bhride (Brigid's mantle) is a piece of cloth.

The cloth was placed on a window sill, fence or tree branch on the 31st of January (the night before St. Brigid’s day). The belief was that during the night St. Bridget would bless the cloth. This cloth would be used for fertility and for curing illness throughout the year.

This symbol represents the flame that was kept lighting out side St. Brigids church for hundreds of years until Cromwell invaded Ireland and blew it out. 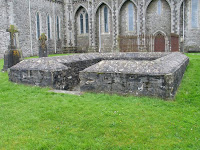 St Brigid wove a cross from rushes on the floor beside the King's bed. In those days people sometimes prepared a bed of rushes. This bed would have been placed in front of the fire place for warmth. 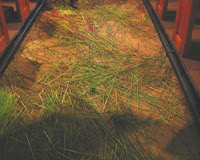 St Brigid is known in tradition and in the affection of the Irish as Mary of the Gael, meaning   that St Brigid was the Mary of Ireland.

She was also Saint to the sick, independent and courageous, compassionate to the poor,
Patron of Kildare, scholars, poets and animals. 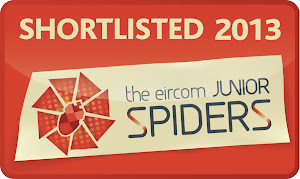